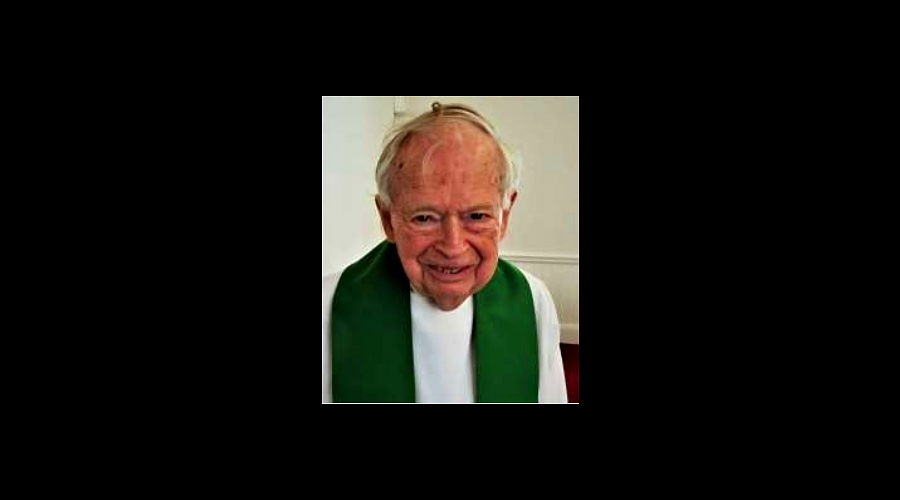 Luther and Diane Durgin came to First Church in 2000 after a long career of settled
ministry and interim ministry, occasionally as co-pastors. Together they mentored our
intended minister Debbie Hill while she finished her studies at Andover-Newton
Seminary. In addition to providing guidance to the minister-in-training, our
congregation thoroughly enjoyed Luther’s leading worship one Sunday a month, with
Diane doing so another Sunday, and Debbie contributing her developing skills on the
other weekends. After a judicious 6 months following Debby Hill’s ordination and
formal call to be the settled pastor, the Durgins asked to join First Church. They became
active members, serving on committees, working on the annual Fair and occasionally
serving as pulpit supply. Luther was a Trustee and valued member of the Investment
Advisory group for many years.
We were privileged to hear first-hand about Luther and Diane’s experiences
volunteering with the Red Cross in disaster relief. They went to Mississippi aiding
victims of Hurricane Katrina and then returned to the Back Bay Mission in Biloxi, as
well as Punta Gorda, Florida with NH Conference volunteers helping rebuild houses
damaged in storms. With the Red Cross they went to San Antonio, Texas during
Hurricane Ike. For three weeks they helped feed and shelter up to 8,000 refugees who
had fled the storm.
Travel was a retirement priority for this couple. Always inquisitive, Luther and Diane
enjoyed visiting historic sites in the United States; exploring the British Isles and
European countries; cruising the rivers of the Continent; sailing the ocean and later
sailing through the Panama Canal on the QE2.
Even in his early 80s, Luther served as a guest worship leader at First Church, joined in
all discussions about structural change and conflict, and represented the church at UCC
regional associations and conferences. One of my last memories of a conversation with
him was about the difficulties he anticipated in marrying a grandchild outdoors in a
field rather than a church. But he did it!

The Rev. Dr. Luther P. Durgin died at Albany Medical Center on December 16,
2020 from complications following a stroke. The son of the late W. Ernest and
Louise Travis Durgin, he was born in Boston on August 28, 1932. Mr. Durgin
graduated from Roslindale High School, and from Bates College. He received his
Master of Divinity degree from Yale Divinity School. At Andover Newton
Theological School, he earned his Doctor of Ministry degree. The Rev. Durgin was
ordained into Christian Ministry May 31, 1958. He is survived by his wife, the Rev.
Dr. Diane. E. Durgin, whom he married February 7, 1987. When they semi-retired,
the Durgins moved to the Keene area. Just a few years ago they settled in a
retirement community in the Berkshires. A complete obituary and a video of
Luther’s service are available at www.dwyerfuneral.com.